The Great Fire of London changed the nature of the City. There were new designs for buildings, less flammable materials, i.e. bricks were used, and insurance fire brigades were introduced. This said, it is wrong to think that before the Great Fire there was no fire prevention, or risk management of fire.

Pre-1666, London was severely overcrowded, with narrow streets and buildings packed close together. London was thriving and there had been an influx of people from the surrounding countryside. In such a densely occupied city, fires were part of everyday life. Each parish had to take responsibility for firefighting. There were no fire brigades, equipment was basic, and officials would stop fires by pulling down buildings.

In 1643, a broadside was published which encouraged people to take responsibility to prevent fire. (A broadside is a large sheet of paper printed on one side only. Historically, in Europe, broadsides were used as posters, announcing events or proclamations, as well as offering political views). Ten years before, in 1632, there had been a considerable fire around the northern edge of London Bridge, which resulted in loss of life and property. Perhaps this broadside was a result of that incident. It was called “Seasonable Advice; for preventing the mischiefe of fire”, written by William Gosling, Engineer, and “Ordered to be Printed by the Lord Major of London”.

It is a detailed account of fire prevention and how fires were dealt with pre-1666. The first piece of advice is that,

“…it is necessary to hang [this advice] in every man’s house, especially in these dangerous times.”

The document reads like risk assessment training, taking you through the steps of identifying fire, managing the risk of fire and actions to be taken when fire does start. It is quite reminiscent of today’s Fire Triangle framework.

The first part looks at fire and how it starts and spreads. For example:

“Some hath been burnt by bad Harths, Chimnies, Ovens, or by pans of fire set upon boards… Cloaths hanged against the fire… leaving great fires in Chimnies, where the sparkes or sickles breaking fell and fired the boards.”

Candles were a common theme:

“Some by sleeping at worke, lea­ving their Candles by them, so many have been burnt of severall Trades… some by drunkards, … carrying fire from place to place, where the winde hath blowne it about the streets, as it did burne St. Edmondsbury.”

The second part is about what one should do to prevent fire. It starts:

“Every house-keeper…, to see to the fire and Candle, and to shut the Seller­windowes, dores, casements, garret-windows, and to stop holes, and sinkes, that fire may not come in by Treason, or otherwise.”

“Seeke to prevent fire at the beginning, and by the sight of smoake…, or by hearing the crackling of sticks, coales, or sparkes of fire.”

Candles can be left, but you should place your candle in a bowl of water and in that way, it will not cause a fire. Bricklayers are advised to ensure that the foundations of hearths and ovens be well built to prevent fire.

Fire equipment is listed. The parish should always keep,

“Hookes, Ladders, Squrts, Buckets, and Scoopes in a readinesse upon any occasion.”

“…you may keepe great Scoopes or Squrts of wood in houses; or if you will, you may have in the Parish a great Squrt on wheeles, that may doe very good service.”

A “Squrt” is a handheld water squirt, similar to a bicycle pump today. A “great Squrt on wheels” is a larger “Squrt” that needed a large water supply.

Finally, the third part looks at what one should do in the event of a fire, by using all available manpower and water, including pipes and conduits from existing water supplies.

A final piece of advice is

“To master the Elements, is either to increase or decrease any of them; for as ayre makes fire increase; so earth will choake it; and water will quench it.”

The conclusion looks at the positives of preventing fire in terms of human life, suffering, including children, unborn babies, money saved, as well as the moral and religious responsibility of individuals in society.

How much people kept to this advice, we do not know. It is basic good house-keeping and common sense, but perhaps it was not enough. In 1661, John Evelyn, scientist and architect, reported to Parliament on the dangers of fire, giving advice and recommendations for managing the risk. Legislation was passed and in 1664 the King wrote to the Lord Mayor of London recommending a more diligent execution of the recent building regulations to prevent fire in the City.

One thing we can say is that The Great Fire of London started and spread due to a very specific set of circumstances, which could not have been predicted in advance and were certainly well above and beyond the simple domestic steps one should take to prevent fire.

The Broadside the “Seasonable Advice; for preventing the mischiefe of fire, that may come by negligence, treason, or otherwise”, (Broadside 25.21) is part of the collections at Guildhall Library. 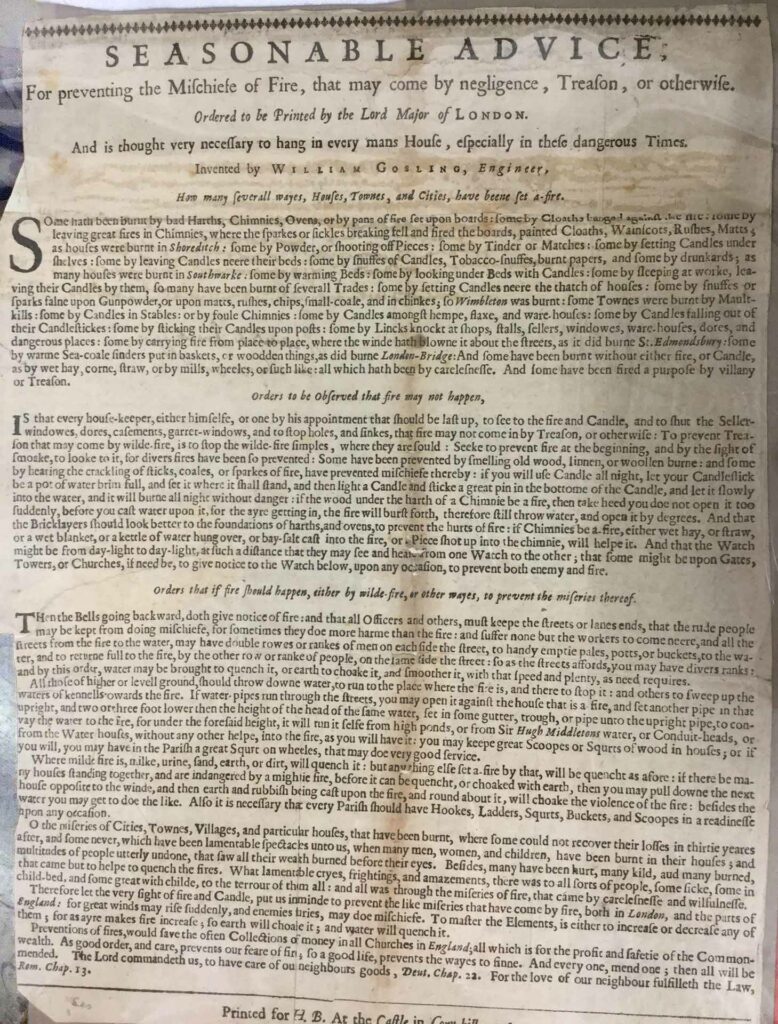