Object of the Month – Guardian Postcards

The art of collecting postcards is known as deltiology. There are many deltiologists and collections out there, and, in particular, there is a collection of Insurance Postcards dating from the late 1890s through to more recent times, owned by Reg Brown, the Insurance Museum Chairman.

Collecting picture postcards became a craze leading to the “Golden Age” of picture postcards running from 1894 to 1914. A plethora of postcards were produced during this time, depicting a wide range of views, buildings and activities.

At the height of the craze between 1894 and 1918, the end of the First World War, over four million postcards were posted every day. With five deliveries a day, cards can still be found with a message similar to “see you in the tearoom this afternoon”. Posted by 10:00am, delivered by noon, the recipient would duly arrive for tea. The early form of personal messaging.

This small group of postcards from Reg’s collection comes from the offices of the Guardian Insurance, Lombard Street, London, in May 1914. It is a snapshot of a day in the office, showing the people at work, lunch, their offices and the kitchen staff. 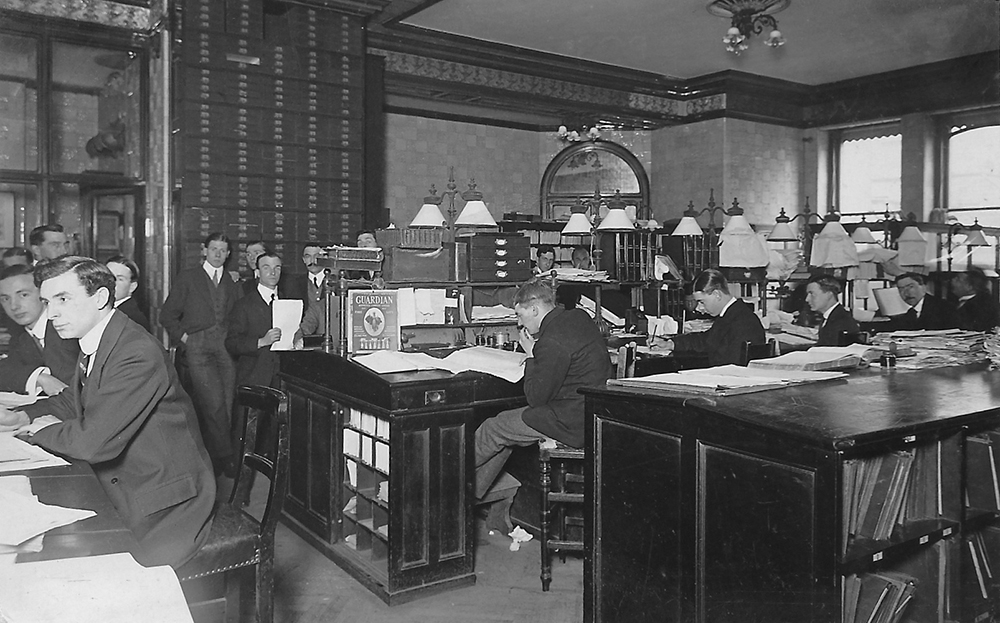 The postcards show how a typical office was run 108 years ago. The shared open plan office depicts the paraphernalia of items needed to run the business: the ledgers, paper, inkwells, high desks and an array of filing systems. The men are dressed formally, with starched collars, some with moustaches and very neat, combed down hair. The single office is that of Mr E. F. Grundy, Assistant Manager in the Foreign Department. Again, there is a lot of paper, ledgers, large tables, an open coal fire to keep him warm with plenty of coal in the scuttle. Just to the right of Mr Grundy is a sophisticated tele-communications system. 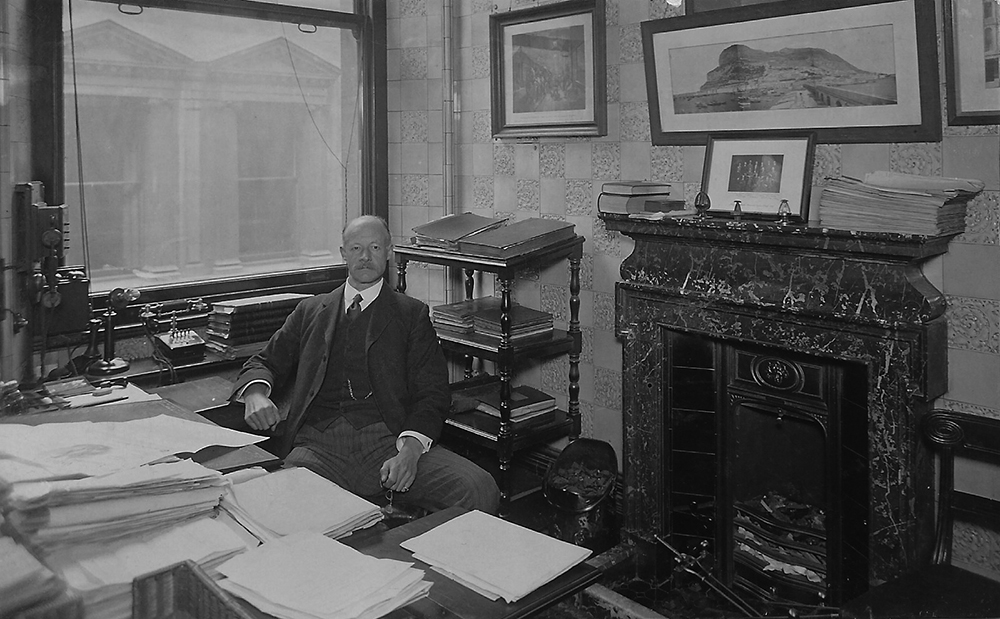 The Guardian Insurance Company provided lunch for their workers, which was served over three sittings, between 12:45pm and 2:30pm. The one we see here is at the end of the 12:45pm sitting. The serving staff are in the background but not really posing for the camera unlike the men. The tables are ready to be cleared, so the food has gone, but there is a bottle of “OK Sauce” and a jar of pickles. 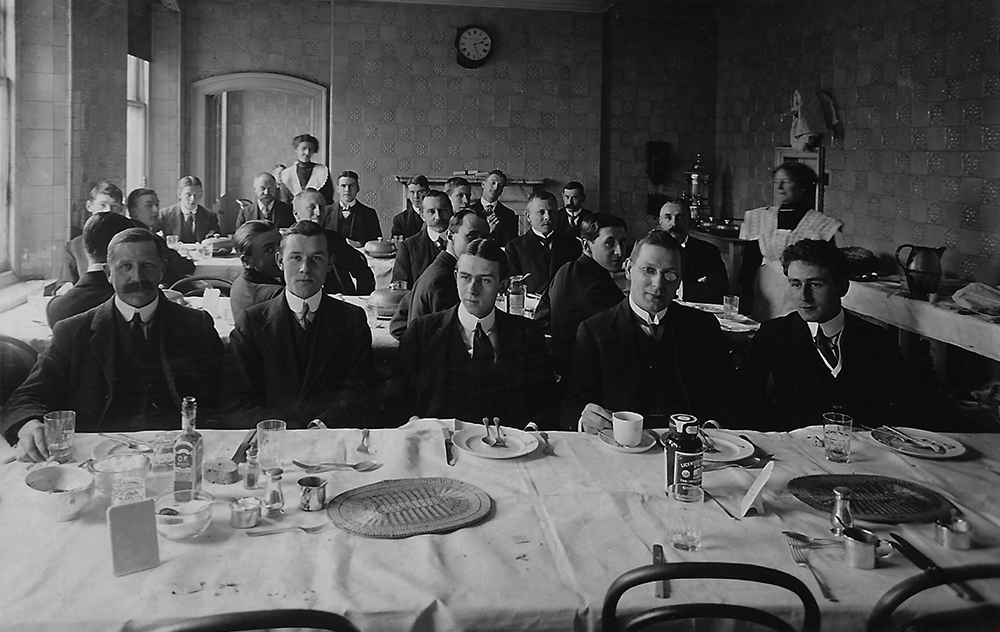 We do not know any of the men in this postcard. They look relatively young, perhaps early in their career. Again, the postcard was taken in May 1914 and the question that is often asked is: “How many of them joined the army, fought in the First World War, died, were injured or returned?”

The postcards also cover the waitressing team who are named on the back of the postcard. They are Miss Lawrence, Miss Moore, Miss Sunaway and Miss Wilkes. Miss Wilkes appears in the dining room too, adopting a supervisory role. 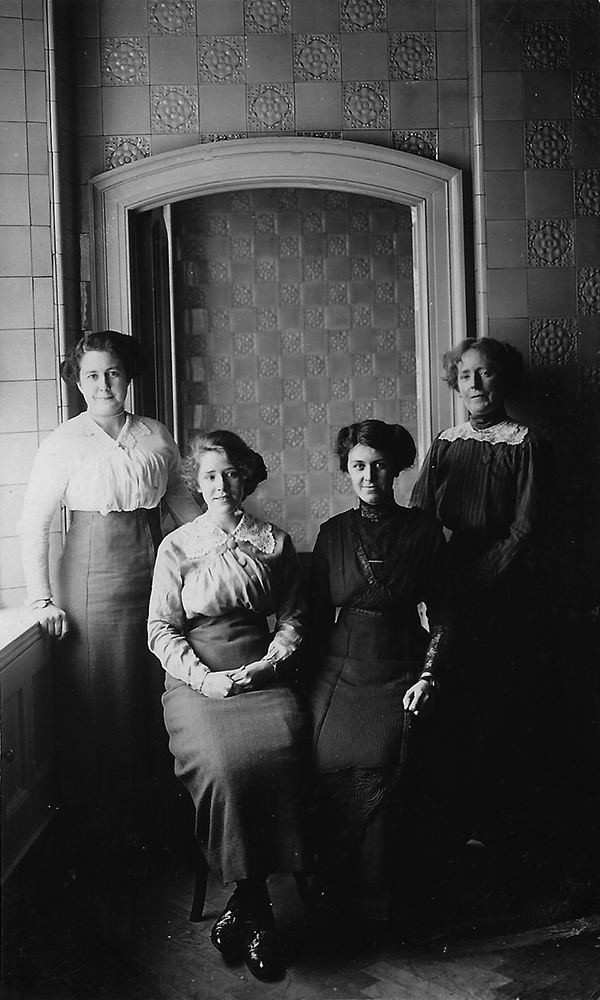 The postcard of the kitchen staff includes Elsie, Annie (Chief Cook), an unnamed assistant cook and Dora Sunaway. These pictures can provide a rich source for genealogists. Were the Sunaways related, perhaps mother and daughter? It would be wonderful to find out who they were and where they lived. Did they commute into the City? There are some Sunaways recorded as living in Barking, and if they were these office workers, they would have commuted via the nearby Fenchurch Street Station. 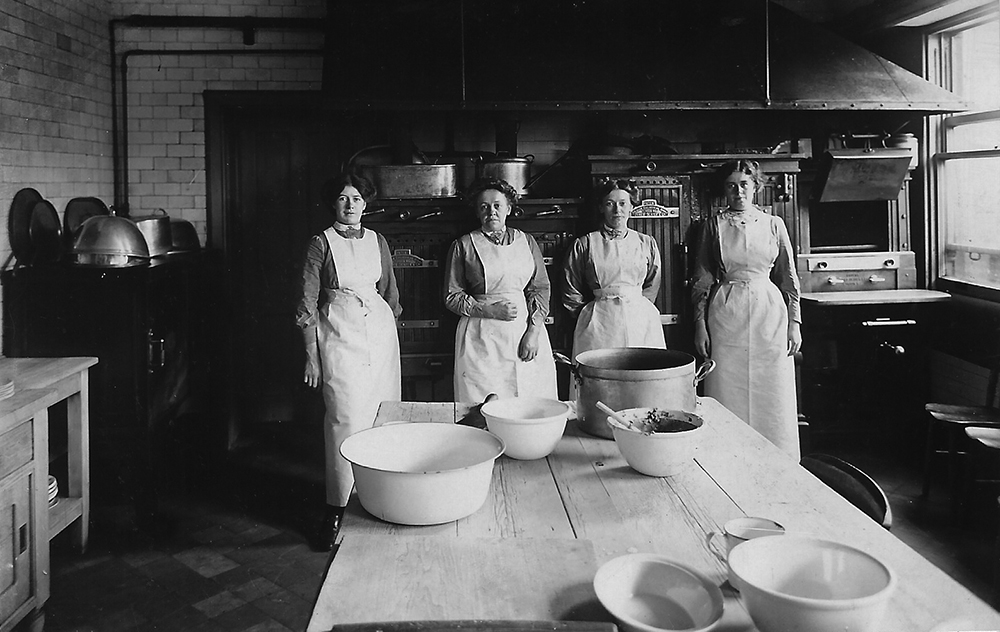 Object of the Month – Guardian Postcards