The father of fire insurance 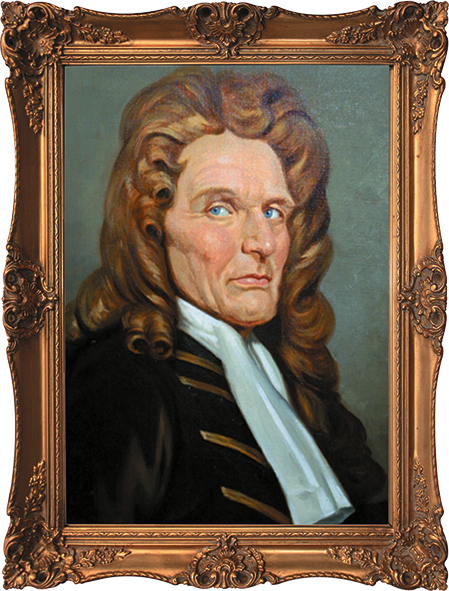 An introduction to Dr Nicholas Barbon

X We don't have a portrait of Nicholas Barbon, a painting that we use on an earlier page to this section, was actually commissioned for the Insurance Hall of Fame in the USA in the 1960's. The portrait may be based on a picture of Barbon’s father, combined with a picture of Barbon contemporary Sir Christopher Wren. At the time that Barbon was developing buildings and creating fire insurance schemes, Wren would have been developing plans for the ‘new’ City of London and for St Paul’s Cathedral. On one of Wren’s plans for the city it mentions an ‘Office of Insurance’ on the back of The Royal Exchange, this is most probably Barbon’s office. Barbon’s property schemes were fast paced and often rode over regulations and rules to get properties developed, it’s said that he tried to stay one step ahead of King Charles II's and Wren’s plans!

Born in London, the eldest son of a religious eccentric belonging to the Fifth Monarchists called Praise-God Barebones. It is believed he was christened “If-Christ-Had-Not-Died-Thou-Hadst-Been-Damned” Barebones, but preferred to go by the name of Nicholas.

Studied medicine in the Netherlands and received his Doctor of Medicine qualification in 1661. Made an honorary fellow of the Royal College of Physicians in 1664.

In 1667 set up the first fire insurance scheme in London to protect his private property investments.

In 1680 established the first joint stock insurance office with three partners. This was called the Fire Office and was later known as the Phenix, due to the image of a Phoenix on their letters and fire marks.

The first to use fire marks to identify their insured buildings.

The first to use watermen as firefighters to extinguish fires on insured buildings – setting in motion the foundations for today’s fire fighting service.

Building developer and the 1st ‘modern’ speculator (Mincing Lane, The Strand, Red Lion Square) of his day. Built or financed property developments to the value of £200,000 (£27.8 million in 2022)

Author of books on economic theory, including “A Discourse in Trade”, inspiring Adam Smith and quoted by Karl Marx.

MP for Bramber 1690-1698, to benefit from privilages to avoid creditors.

Created a Land Bank, innovating the use of property mortgages.

Owned Osterley House (built by Thomas Gresham), which he lost this due to his mounting debts. 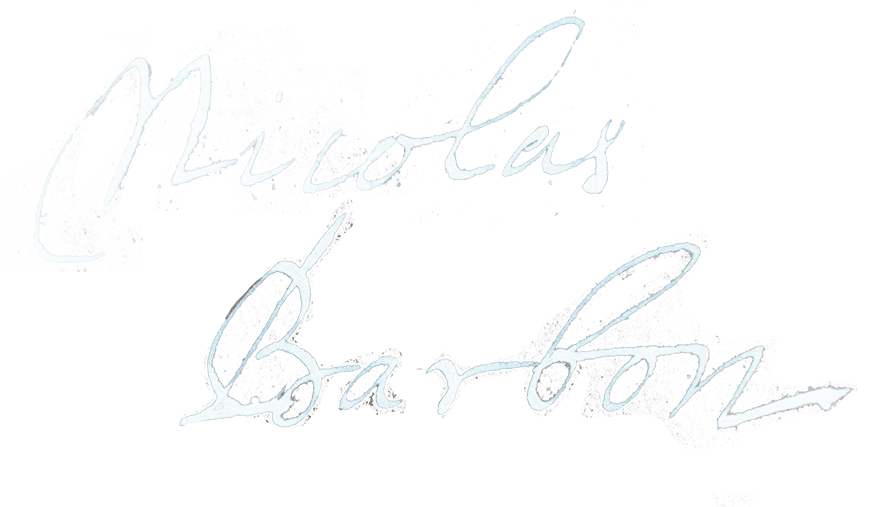 Barbon retained a number of lawyers to protect his  complex financial and commercial interests, Roger North, a lawyer and biographer, wrote of Barbon.

‘He judged well of what he undertook, and had an inexpugnable pertinacity of pressing it through. He never proposed to tempt men to give way or join but by their interest, laid plainly before them . . .

…And he would endure all manner of affronts and be as tame as a lamb . . . He never failed to satisfy everyone in treaty and discourse, and if he had performed as well, had been a truly great man. His fault was that he knowingly overtraded his stock, and that he could not go through with undertakings without great disappointments to the concerned, especially in point of time. This exposed him to great and clamorous debts, and consequently to arrests and suits, wherein he would fence with much dexterity, with dilatories and injunctions.’

‘…his house in the morning (is) like a court, crowded with suitors for money. And he kept state, coming down at his own time like a magnifico, in deshabille, and so to discourse with them. And having very much work, they were loath to break finally, and upon a new job taken they would follow and worship him like an idol, for then there was fresh money.’ 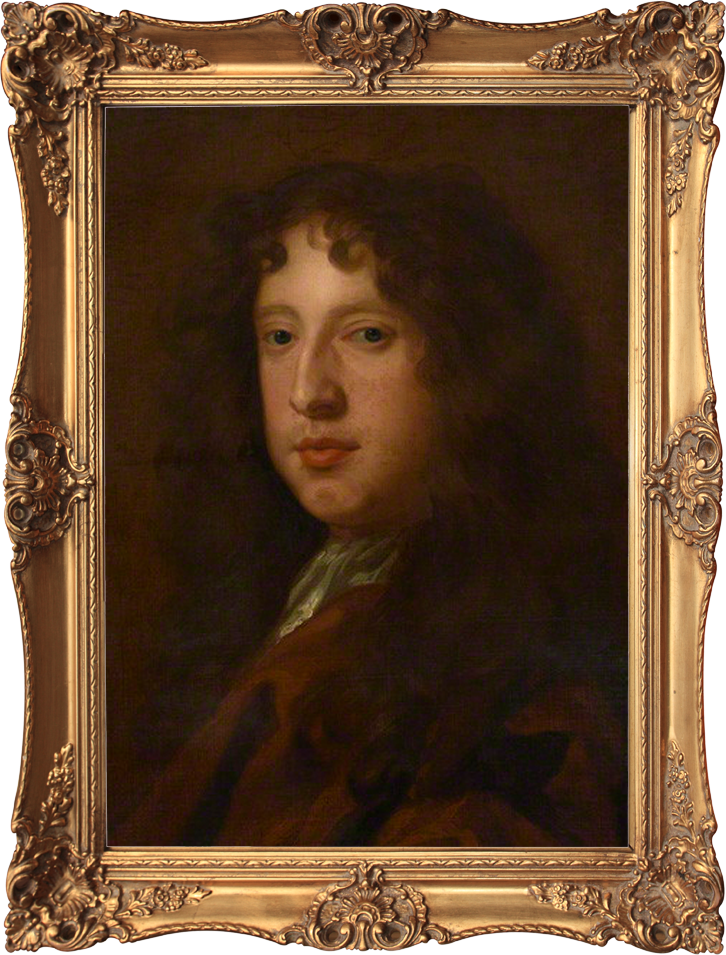 After witnessing the devastating effects of the fire, Barbon sought to protect his building investments and in 1667 according to some accounts, he set up the Insurance Office for Houses at the rear of the Royal Exchange. At first he ran this to protect his own new property developments, but in 1680, along with 3 associates he merged this into the first joint-stock insurance company, called the ‘Fire Office’. This company offered fire insurance for up to 5,000 households in London and was the first fire insurance scheme of its kind.

This fire insurance policy held by the Association of British Insurers (ABI), is one of the oldest fire policies in existence. It is signed by Nicholas Barbon and covers a house owned by Sir William Twisden south of the Barbican.

Because house numbers were not yet used, the position of the house was described instead.

A similar policy numbered 1403 held by the Museum of London, has been transcribed as: ‘The third house westward from Redcross Streete and distant from thence to the middle of the said house about seventy-four feet’. The house was insured for £130 for a premium of £5, 19 shillings and two pence. Today most insurance policies last only one year, but this policy was for 31 years. If it burned down, Sir William would have been paid £130.

The only earlier surviving British fire policy is dated October 1681 and belongs to the Corporation of London. 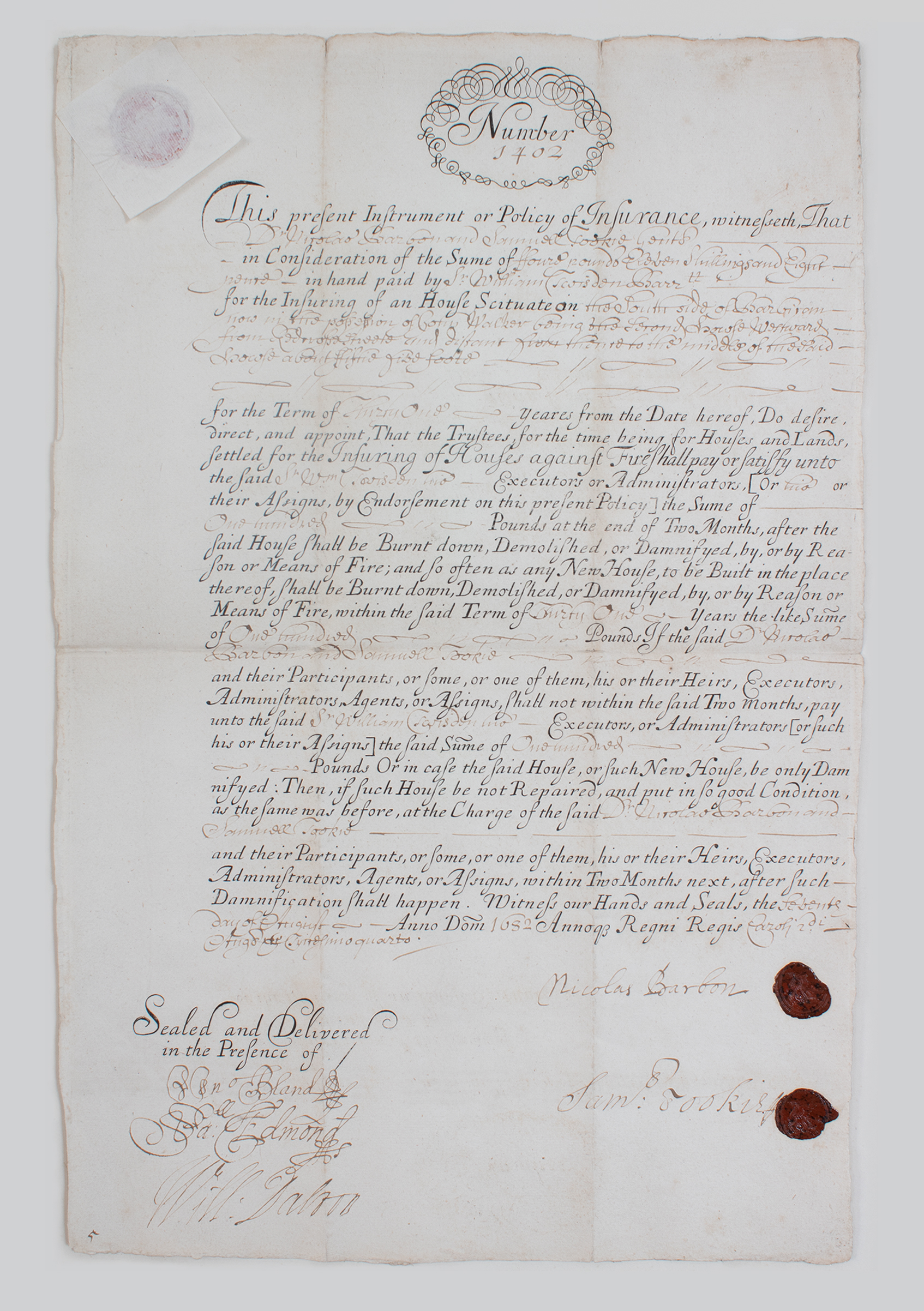 So that insured buildings could be easily identified, Barbon created the first insurance fire mark. This was a metal plaque, usually made of lead, that displayed the company’s logo. The metal fire mark was attached to the outside of the property, so that it could be easily identified. The fire mark also displayed the policy insurance number that it was insured on. The numbers were punched into the cast metal.

If the property burned down the fire mark would survive and provide proof that the property was insured. Barbon was a proven marketeer and the fire marks also provided another means of advertising the Fire Office.

We cannot find any record or copy of the Fire Office’s fire mark, so the visual interpretation on this page is based on the emblem stamped into the wax seal on the ABI’s 1402 policy. Descriptions of the fire mark say that it featured the phoenix.

A later insurance company, the Hand in Hand, based their fire mark numbering on that of the Fire Office also known as the “Phenix”. The fire marks were usually brightly painted or gilded. 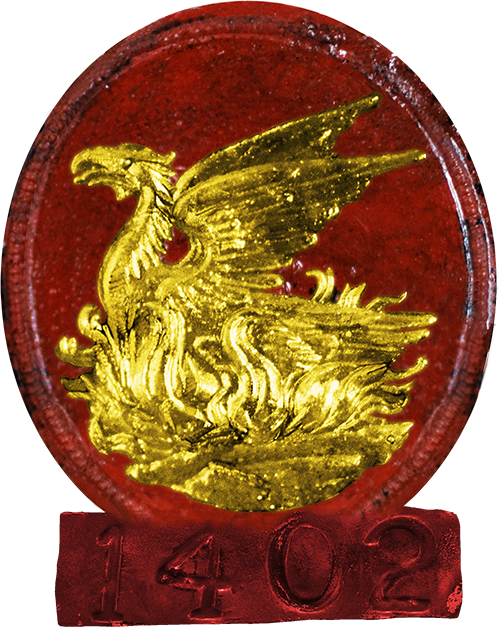 Mock up of the Fire Office's fire mark

From the 16th century pamphleteering became a popular way of spreading news, political probaganda, social criticism and even romantic fiction. These single sheets of printed material were sold or handed out depending on the nature of the content.

Nicholas Barbon used pamphleting as a way of promoting the Fire Office, as in this advert printed in 1694, now held at Yale University. Pamphlets such as this one, would have be handed out to passers-by or left at one of the many coffee houses found around 17th century London.

Pamphlet wars were also not uncommon. Barbon was later to use pamphlets to set his own company against his rivals the Friendly Society. A document you will see later in this gallery called “A letter to a Gentleman” shows how he promoted the Fire Office as providing better security at a cheaper rate than that offered by his rival. 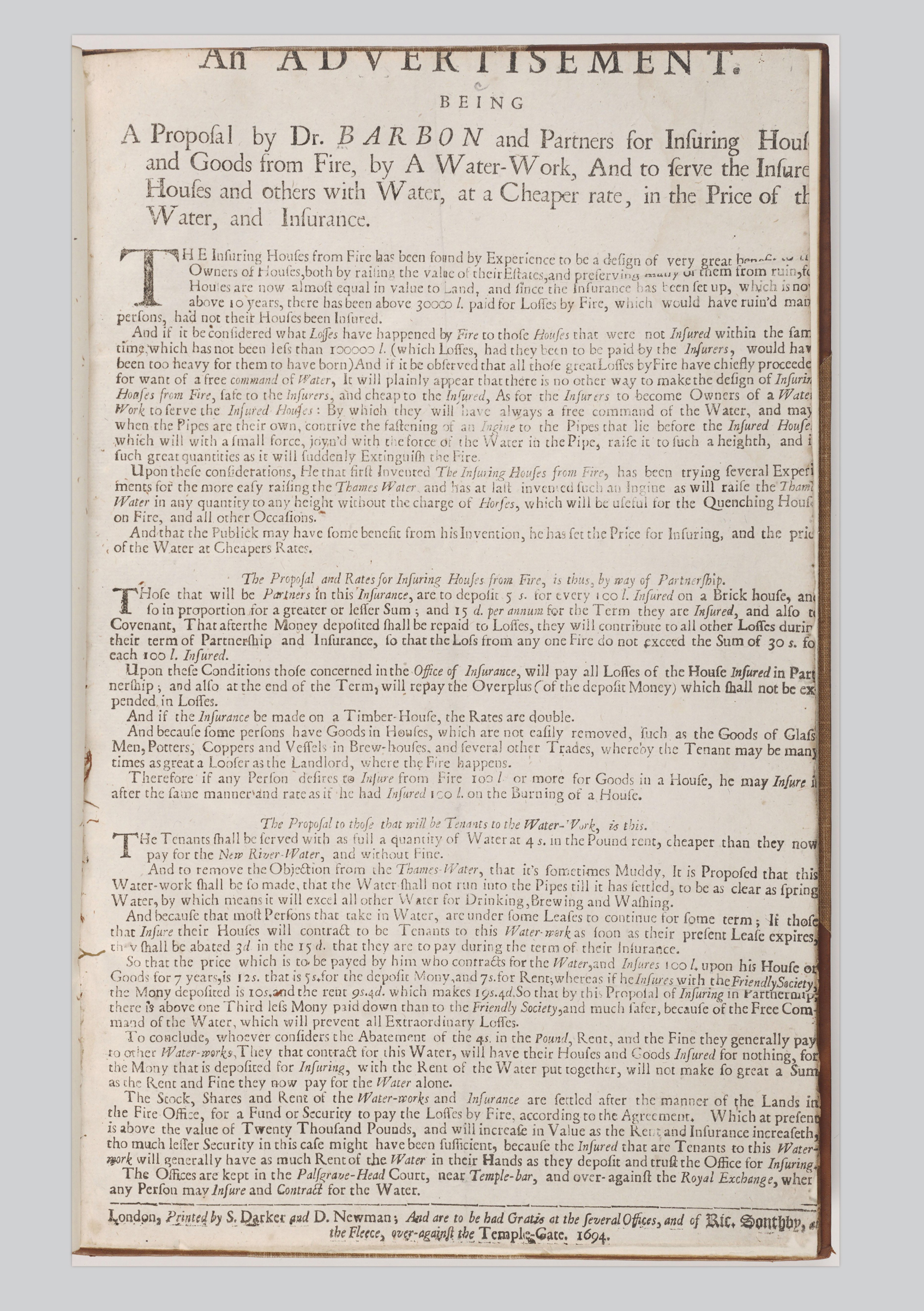 The very first insurance firefighters (made up of watermen) were set up in 1680 by Barbon’s Fire Office. The watermen wore an identifying numbered arm badge as per the example below. 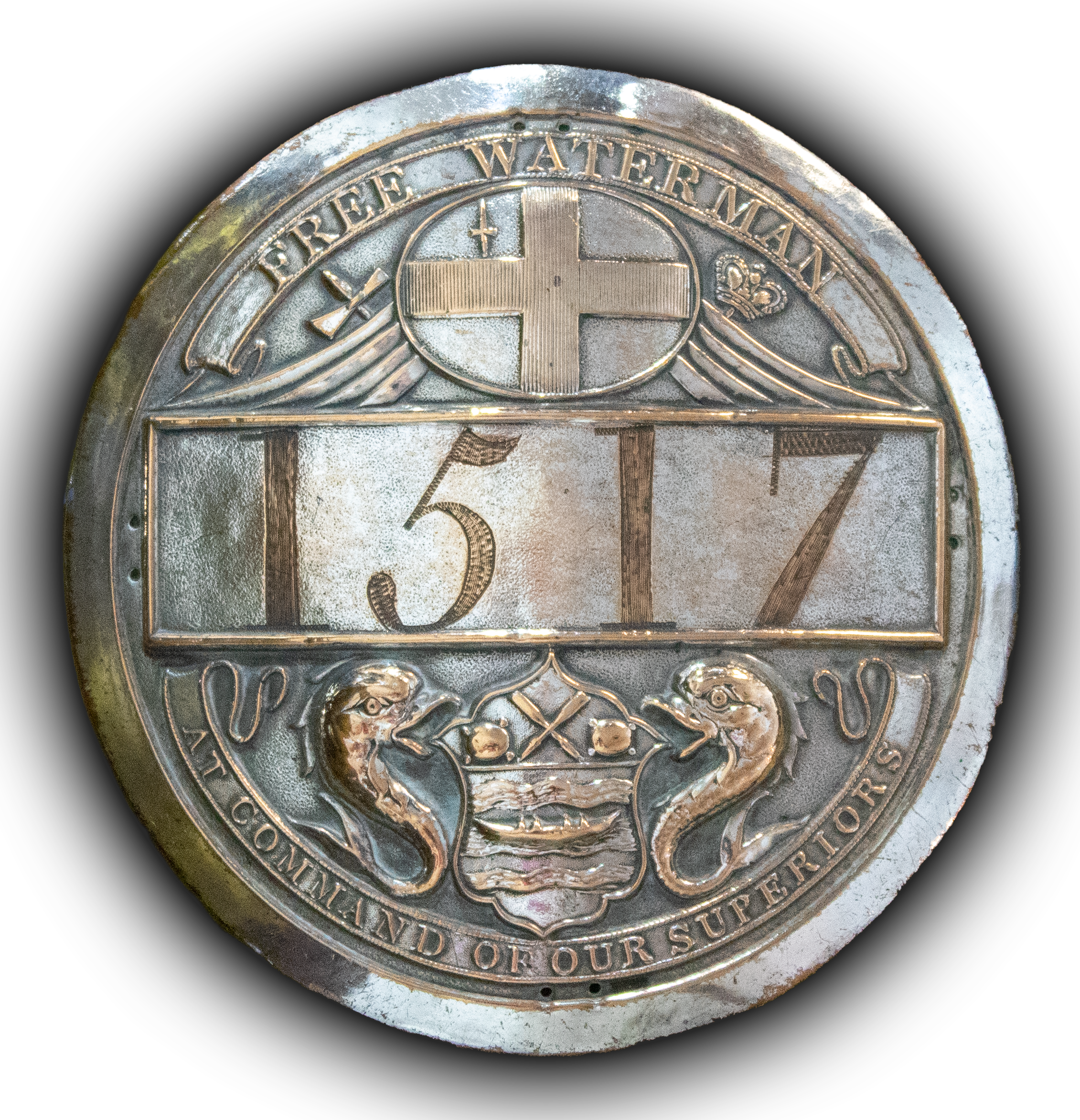 A paper published by The Fire Office in 1680 entitled “Arguments for Insuring Houses from Fire” referred to 35 fires that had happened in and around London since 1666 and continued: “And this must be granted, if the Office could have supported itself under those many losses, when they gave no assistance to the extinguishing and preventing of the fires…

…it may be reasonably supposed to subsist under future casualties, when it is assisted by the contrivance and industry of a company of men, versed and experienced in extinguishing and preventing of the fire“.

Daniel Defoe later wrote that the Fire Office and the Friendly Society “have each of them, a set of lusty fellows, generally watermen, who being immediately called up wherever they live, by watchmen appointed, are it must be confessed very active and diligent in helping to put out the fire.” 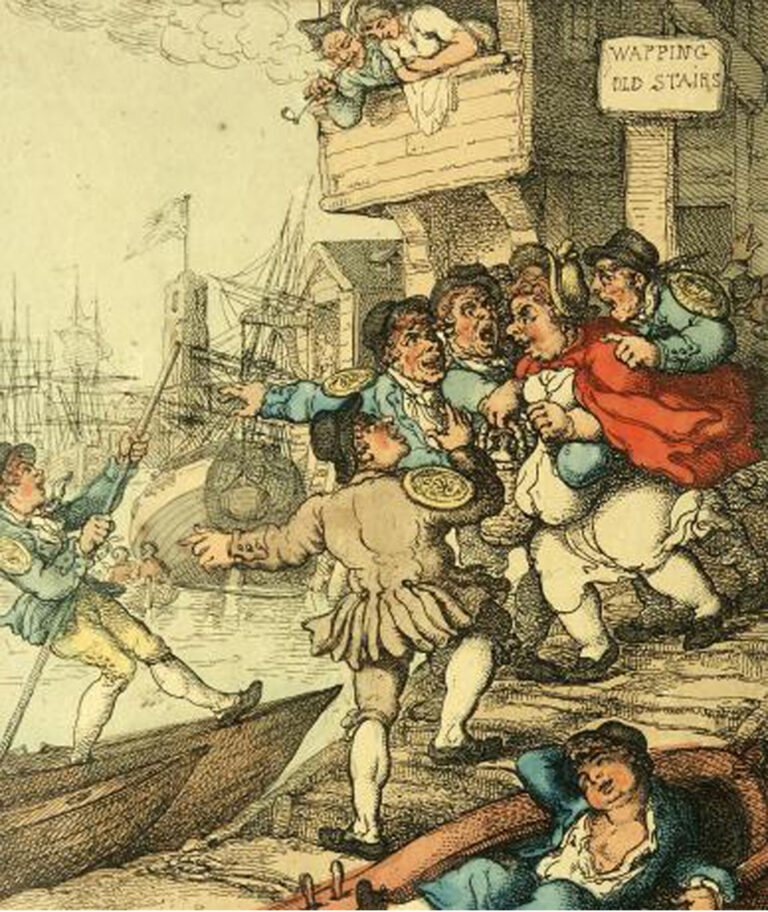 Watermen vying for business with a customer

There were several reasons why Nicholas Barbon would have chosen to use watermen as his insurance firefighters:

Maintaining an experienced fire brigade was a more effective force for fighting fires –  saving the fire office money on the costs of rebuilding or paying out on claims.

X Some fire marks that you see today are actually fake firemarks. These were produced for a number of reasons: - fire marks being seen as attractive, interesting and collectable - to deter arsonists Do you think this firemark is original or fake?

With the Great Fire of London fresh in people’s minds, fire insurance was immediately popular. Barbon’s Fire Office soon had competitors. The first of these was called The Friendly Society for Securing Houses from Loss by Fire. As per Barbon's scheme, buildings that were insured were identified by company signs called "firemarks" such as this one representing The Friendly Society. 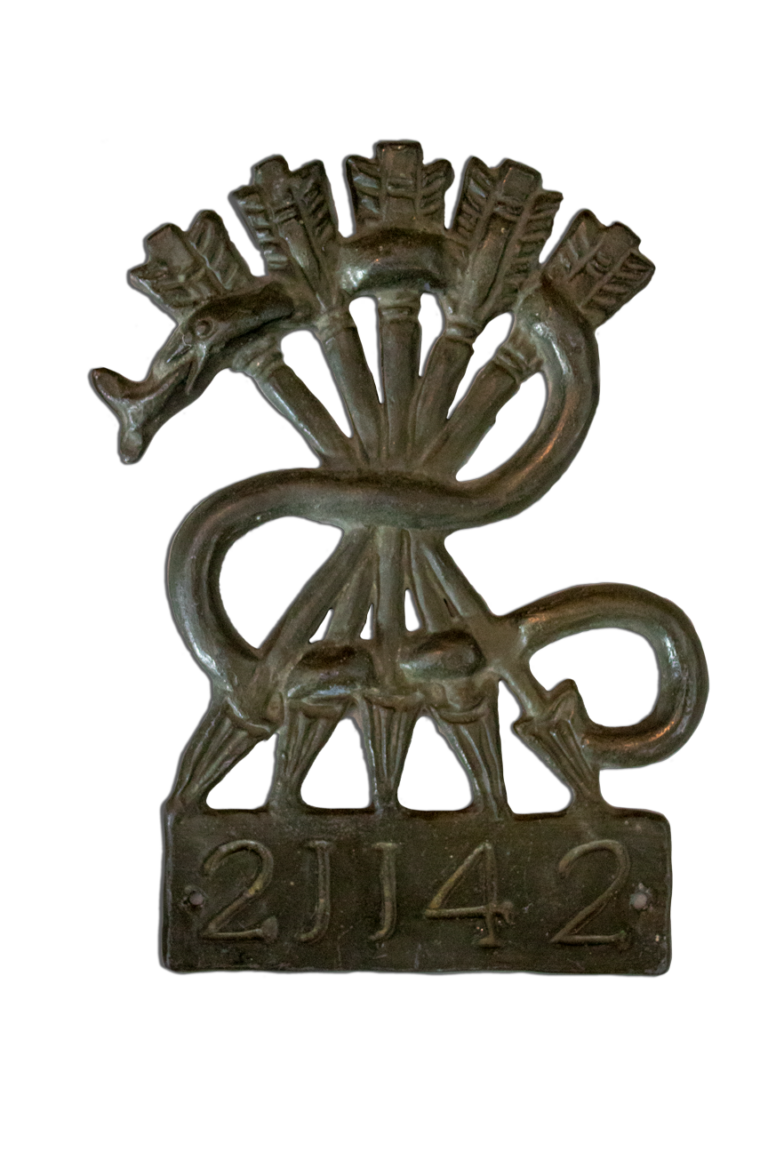 The Friendly Society was a new kind of insurance organisation. Formed in 1684, it was a mutual insurer, rather than a profit-making company. It operated from an office in London’s Falcon Court, on Fleet Street. As a mutual, everyone who had insurance had to agree to pay a share of all losses that occurred. Barbon’s Fire Office company and the mutual Friendly Society were bitter rivals, but they were both very successful, insuring thousands of houses in London, so soon they had even more competition.

Letter to the Gentleman
Nicholas Barbon’s Fire Office, was fiercely competitive and promoted the benefits of the Fire Office versus the Friendly Society in a series of letters.

(Image courtesy of The British Library) 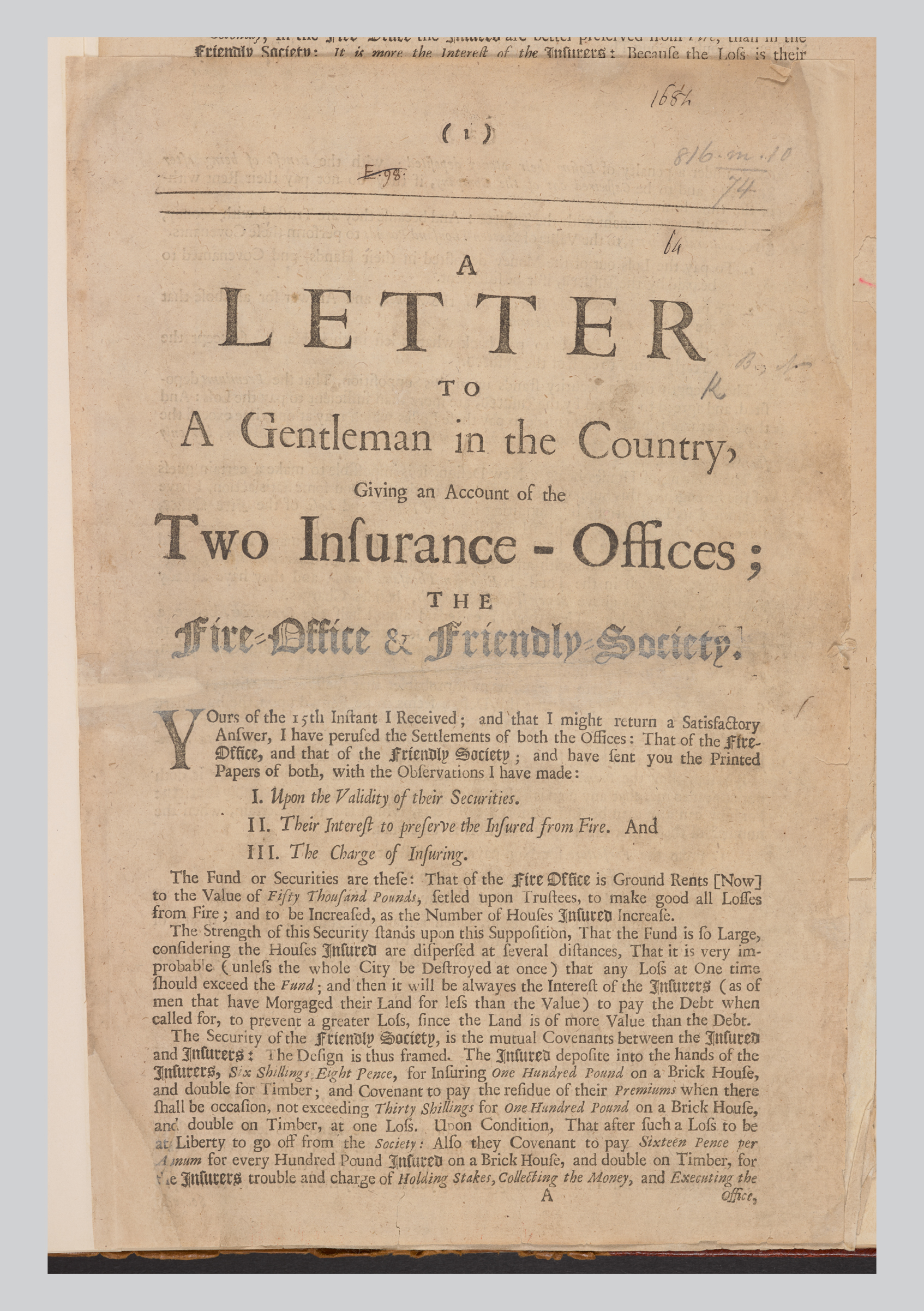 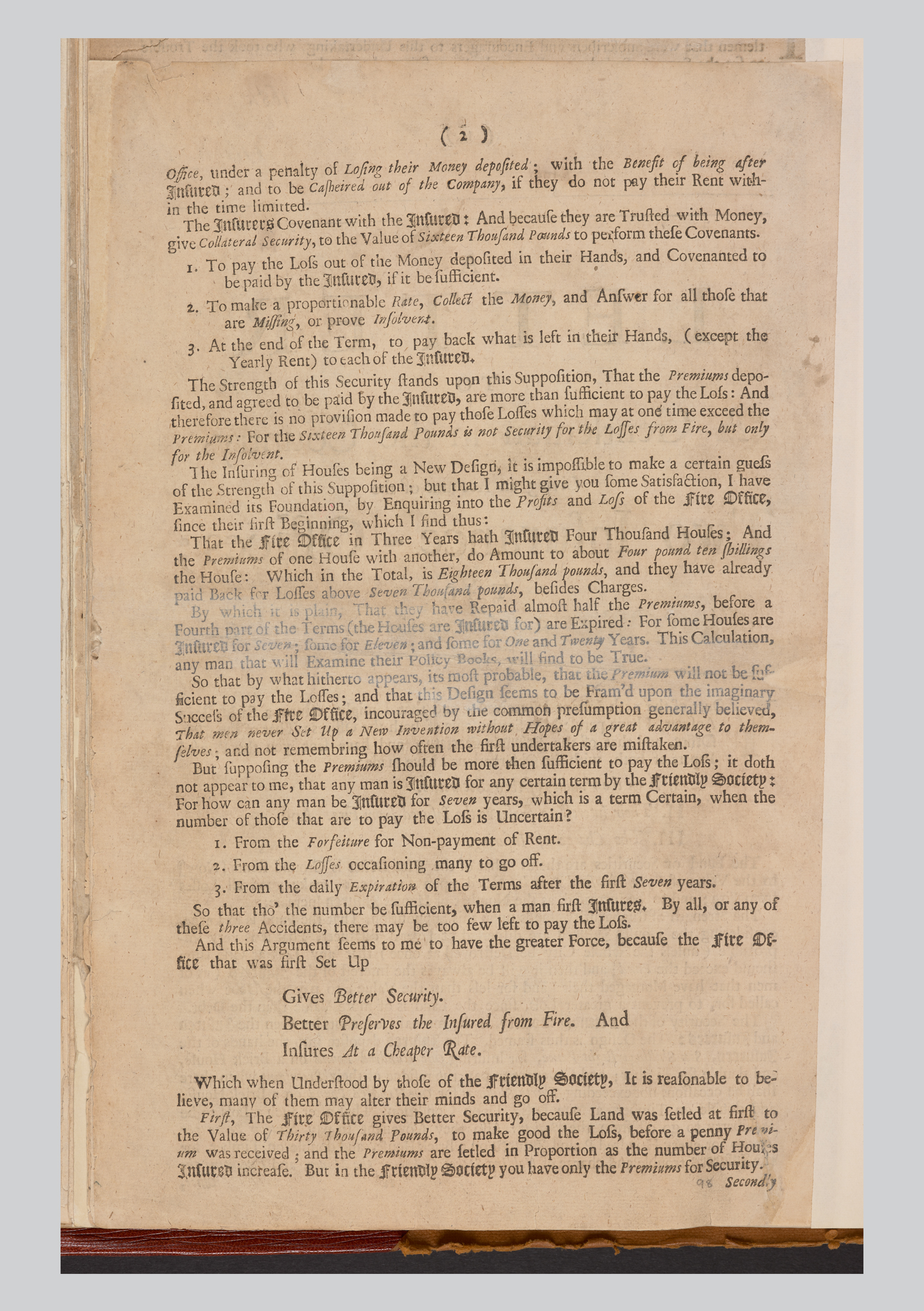 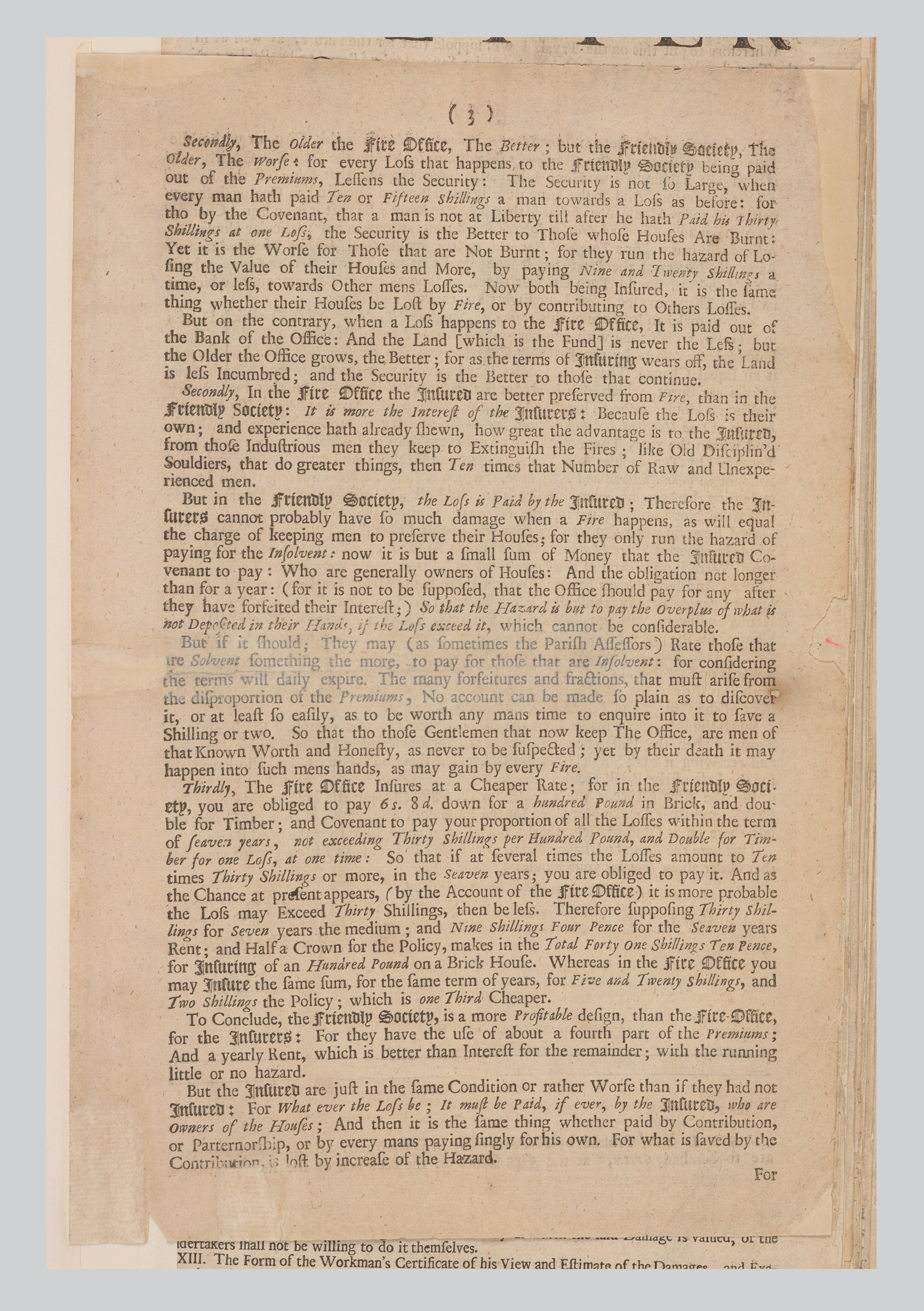 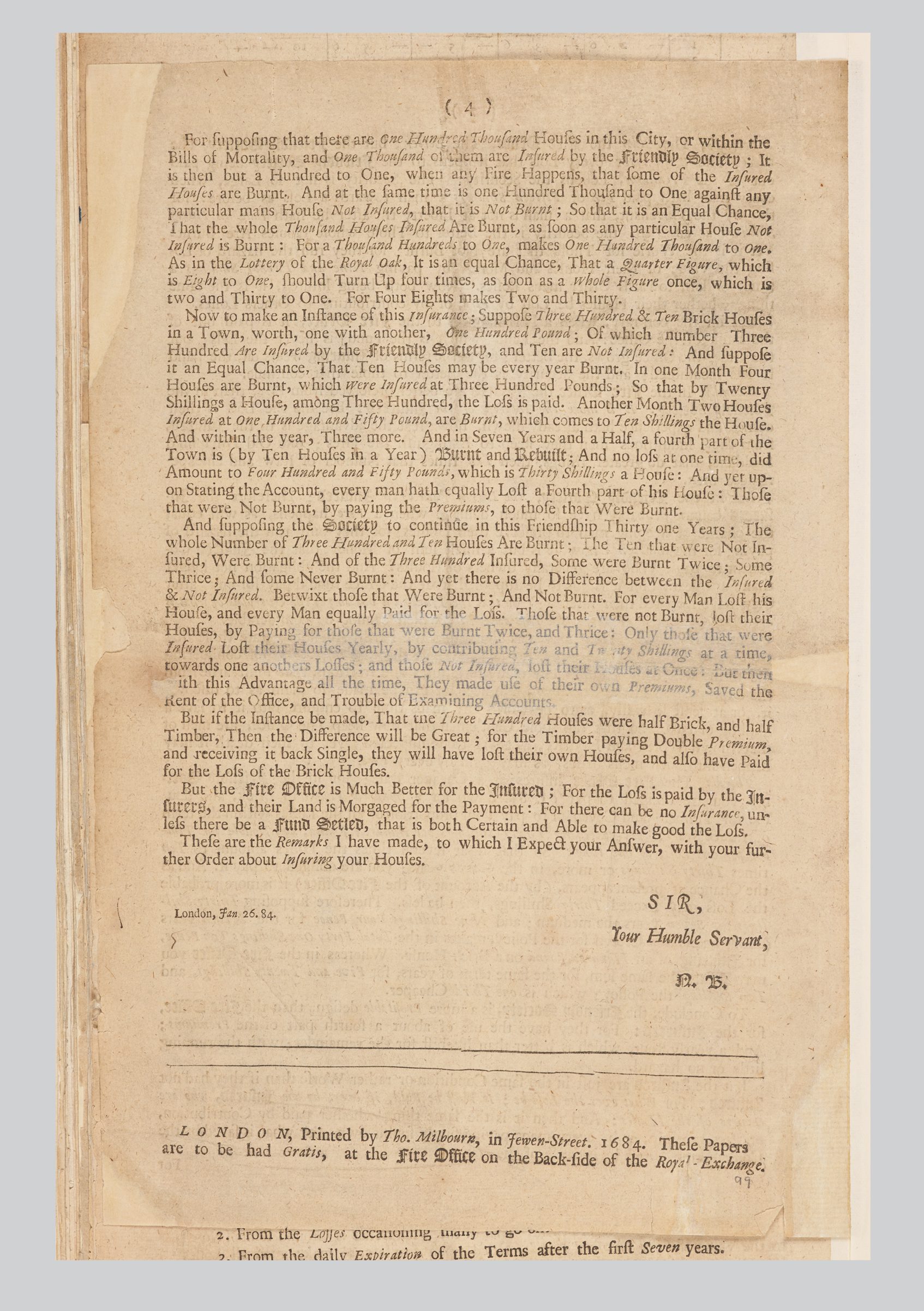 A letter to a gentleman in the country

Evolution of  fire insurance, the fire offices and their firefighting brigades 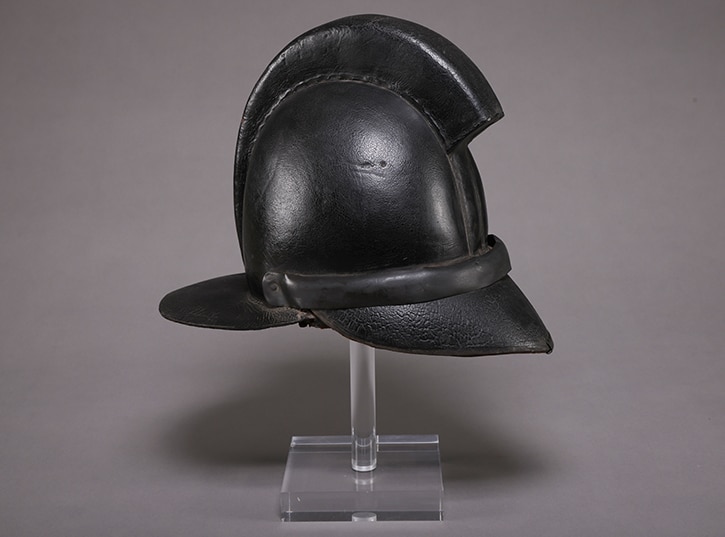